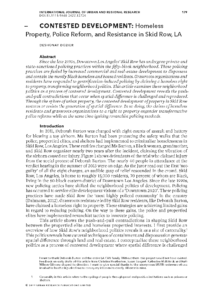 Abstract: Since the late 1990s, Downtown Los Angeles’ Skid Row has undergone private and state‐sanctioned policing practices within the fifty‐block neighborhood. These policing practices are fueled by increased commercial and real‐estate development to dispossess and contain the mostly Black homeless and housed residents. Grassroots organizations and residents have responded to gentrification‐induced policing by claiming a homeless right to property, transforming neighborhood politics. This article examines these neighborhood politics as a process of contested development. Contested development reveals the push‐and‐pull contradictions that occur when spatial difference is challenged and reproduced. Through the sphere of urban property, the contested development of property in Skid Row restores or resists the generation of spatial difference. In so doing, the claims of homeless residents and grassroots organizations to a right to property engender transformative police reforms while at the same time igniting revanchist policing methods.