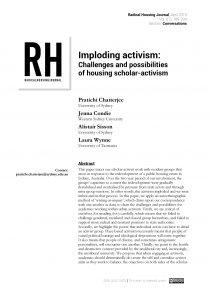 Abstract: This paper traces our scholar-activist work with resident groups that arose in response to the redevelopment of a public housing estate in Sydney, Australia. Over the two-year period of our involvement, the groups’ capacities to contest the redevelopment were gradually destabilised and neutralised by pressure from state actors and through intra-group tensions. In other words, the activism imploded and we were imbricated in that process. In this paper, we apply an autoethnographic method of ‘writing-as-inquiry’, which draws upon our correspondence with one another as data, to chart the challenges and possibilities for academics working within urban activism. Firstly, we are critical of ourselves for treading (too) carefully, which meant that we failed to challenge gendered, racialized and classed group hierarchies, and failed to support more radical and resistant positions to state authorities. Secondly, we highlight the power that individual actors can have to derail an activist group. Place-based activism necessarily means that people of varied political leanings and ideological dispositions will come together. It also means that people of diverse, and sometimes antagonistic personalities, will encounter one another. Thirdly, we point to the hostile and destructive context provided by the neoliberal city and, increasingly, the neoliberal university. We propose that when engaging in activism, academics should determinedly de-centre the self and centralise activist aims as they work to balance the objectives on both sides of the scholar-activist hyphen. We deliberate the role academics can play in mediating the conflicts that arise in activism, and the repercussions of such a direction, which inevitably means accepting the messiness of activism, and as Haraway has put it, ‘staying with the trouble’.

Affordable Housing and City Welfare Research 101: A Manifesto for Ethical Research in the Downtown East Side
Scroll to top