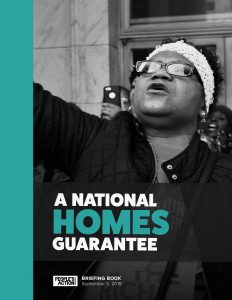 Introduction: Everyone living in the United States should have safe, accessible, sustainable, and permanently affordable housing: a Homes Guarantee.

Right now, our country falls woefully short of delivering on this promise. Tiana Caldwell is the descendant of slaves, the granddaughter and daughter of veterans who did not benefit from the G.I. Bill. She grew up in poverty in Parsons, Kansas. Tiana was diagnosed with ovarian cancer last spring, and forced to choose between treatments or paying rent. Her landlord evicted her, and her family became homeless, spending $300-500/week to live in a hotel for six months. Vernell Robinson is a public housing resident in Far Rockaway, Queens. Vernell survived Superstorm Sandy and experienced undrinkable water and mold after the storm worsened the city’s already-crumbling public housing. David Zoltan was injured on a job, lost a leg, and discovered that less than 1% of all apartments in Chicago, where he lives, are both affordable and accessible. He finally found an accessible place to live, but it costs him $1050/month, and his monthly disability check is only $950. After Jermain Abdullah got out of prison, he lived in a homeless shelter for three years. The shelter was filthy, the roof leaked, and roaches crawled on the sink and toilet seats. To Jermain, the shelter felt like prison all over again.

These stories are not isolated or extreme, but rather very typical outcomes of America’s systemic and racialized housing emergency. In 2019, a full time worker earning minimum wage cannot afford a two-bedroom apartment in any county—urban, suburban, or rural—in the United States. 21 million households, disproportionately people of color, spend over 30 percent of their income on housing. Only one in five households that qualify for federal housing assistance receives it. America has betrayed public housing communities through decades of racist disinvestment and neglect; too often, residents face a brutal choice between appalling conditions or rehousing promises that are insufficient—less affordable, far away—or simply never materialize. Over 3 million families and individuals are experiencing homelessness. Millions more live one medical bill, flat tire, or other life event away from homelessness.

The federal government has not made a large scale investment to address affordable housing shortages since Franklin D. Roosevelt’s New Deal, which created public housing for civilians. Now, we need action beyond that scale. The country’s housing crisis is untenable, and it must end. We need a Homes Guarantee that will:

Fully realized, this proposal will guarantee homes for all. Rents will be set based on tenants’ needs and real costs to local government, rather than speculative market prices. Land will be stewarded by and on behalf of everyday people instead of financialized by developers and landlords. A Homes Guarantee will offer both reparative and proactive approaches, including restorative justice to communities impacted by decades of discriminatory housing policy, as well as investments that slash carbon emissions and support resiliency from ongoing climate breakdown.

Offering a plan to eradicate housing insecurity and homelessness in America is a gigantic undertaking. It is also a moral and political responsibility. This briefing book is our detailed proposal for a Homes Guarantee.

From Gatekeepers to Gateway Constructors: Credit Rating Agencies and the Financialization... Precarious Territory: Property Law, Housing, and the Socio-Spatial Order
Scroll to top