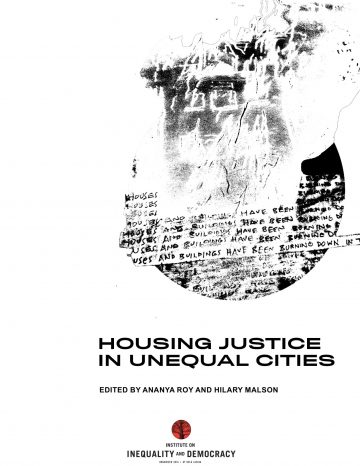 Housing Justice in Unequal Cities is a global research network funded by the National Science Foundation (BCS 1758774) and housed at the UCLA Luskin Institute on Inequality and Democracy. This open-access volume, co-edited by Ananya Roy and Hilary Malson, brings together movement-based and university-based scholars to build a shared field of inquiry focused on housing justice. Based on a convening that took place in Los Angeles in January 2019, at the LA Community Action Network and at the University of California, Los Angeles, the essays and interventions situate housing justice in the long struggle for freedom on stolen land. Embedded in the stark inequalities of Los Angeles, our work is necessarily global, connecting the city’s Skid Row to the indebted and evicted in Spain and Greece, to black women’s resistance in Brazil, to the rights asserted by squatters in India and South Africa. Learning from radical social movements, we argue that housing justice also requires a commitment to research justice. With this in mind, our effort to build a field of inquiry is also necessarily an endeavor to build epistemologies and methodologies that are accountable to communities that are on the frontlines of banishment and displacement.

The full program of the conference as well as more information on the Network, and how to join it, are available here.