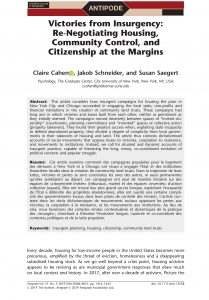 Abstract: This article considers how insurgent campaigns for housing the poor in New York City and Chicago succeeded in engaging the local state, non-profits and financial institutions in the creation of community land trusts. These campaigns had long arcs in which victories and losses built from each other, neither as permanent as they initially seemed. The campaigns moved iteratively between spaces of “invited citizenship” (courtrooms, planning committees) and “invented” spaces of collective action (property takeovers). They found their greatest success when, exploiting state in capacity to defend abandoned property, they elicited a degree of complicity from local governments in their takeovers of housing and land. The article thus contests dichotomized accounts of social movements that oppose losses to victories, cooptation to resistance, and movements to institutions. Instead, we call for situated and dynamic accounts of insurgent practice, capable of theorising the long, messy, co-constituted evolution of political contexts and popular struggle.

Download >> Victories from Insurgency: Renegotiating Housing, Community Control, and Citizenship at the Margins

It’s Time to End Single-Family Zoning Tenant and Resident Militancy for Housing Justice: An Exchange Between Amanda...
Scroll to top