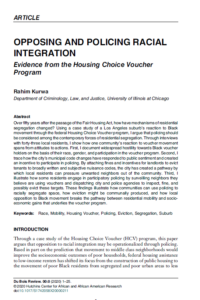 Abstract: Over fifty years after the passage of the Fair Housing Act, how have mechanisms of residential segregation changed? Using a case study of a Los Angeles suburb’s reaction to Black movement through the federal Housing Choice Voucher program, I argue that policing should be considered among the contemporary forces of residential segregation. Through interviews with forty-three local residents, I show how one community’s reaction to voucher movement spans from attitudes to actions. First, I document widespread hostility towards Black voucher holders on the basis of their race, gender, and participation in the voucher program. Second, I trace how the city’s municipal code changes have responded to public sentiment and created an incentive to participate in policing. By attaching fines and incentives for landlords to evict tenants to broadly written and subjective nuisance codes, the city has created a pathway by which local residents can pressure unwanted neighbors out of the community. Third, I illustrate how some residents engage in participatory policing by surveilling neighbors they believe are using vouchers and dispatching city and police agencies to inspect, fine, and possibly evict these targets. These findings illustrate how communities can use policing to racially segregate space, how eviction might be communally produced, and how local opposition to Black movement breaks the pathway between residential mobility and socioeconomic gains that underlies the voucher program.