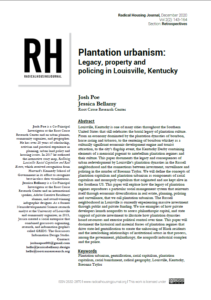 Abstract: Louisville, Kentucky is one of many cities throughout the Southern United States that still celebrates the brutal legacy of plantation culture. From an economy dominated by the plantation dynasties of bourbon, horse racing and tobacco, to the centering of bourbon whiskey as a culturally significant economic development engine and tourist attraction, to the city’s flagship event, the Kentucky Derby containing elements of a memorial pageant to antebellum plantation regimes and their culture. This paper documents the legacy and consequences of urban redevelopment by Louisville’s plantation dynasties in the Russell neighborhood and the connections between investment, surveillance and policing in the murder of Breonna Taylor. We will define the concepts of plantation capitalism and plantation urbanism as components of racial capitalism and monopoly capitalism that originated and are kept alive in the Southern US. This paper will explore how the legacy of plantation regimes reproduces a particular social management system that reinvents itself through economic diversification in real estate, planning, policing and surveillance, that we call plantation urbanism. The Russell neighborhood in Louisville is currently experiencing massive investment through public and private funding. We use examples of how private developers launch nonprofits to access philanthropic capital, and state support of private investment to illustrate how plantation dynasties hoard resources and exercise political control over time. This paper will document the historical and material forces of plantation regimes that drive state-led gentrification to create the unhousing of Black residents and the interlocking relationships of institutional actors in that process, among the government, philanthropy, the nonprofit industrial complex and the police.

Why Do We Always Talk About Immigrants with a Language of “Difference”?... Community Solar as Energy Reparations: Abolishing Petro-Racial Capitalism in...
Scroll to top