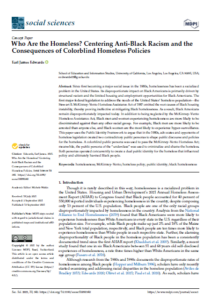 Abstract: Since first becoming a major social issue in the 1980s, homelessness has been a racialized problem in the United States. Its disproportionate impact on Black Americans is primarily driven by structural racism and the limited housing and employment opportunities for Black Americans. The first major federal legislation to address the needs of the United States’ homeless population—the Stewart B. McKinney–Vento Homeless Assistance Act of 1987 omitted the root causes of Black housing instability, thereby proving ineffective at mitigating Black homelessness. As a result, Black Americans remain disproportionately impacted today. In addition to being neglected by the McKinney–Vento Homeless Assistance Act, Black men and women experiencing homelessness are more likely to be discriminated against than any other racial group. For example, Black men are more likely to be arrested than anyone else, and Black women are the most likely to experience hyper-surveillance. This paper uses the Public Identity Framework to argue that in the 1980s, advocates and opponents of homeless legislation created two contradictory public personas to shape public discourse and policies for the homeless. A colorblind public persona was used to pass the McKinney–Vento Homeless Act; meanwhile, the public persona of the “underclass” was used to criminalize and shame the homeless. Both personas operated concurrently to create a dual public identity for the homeless that influenced policy and ultimately harmed Black people.

Download >> Who Are the Homeless? Centering Anti-Black Racism and the Consequences of Colorblind Homeless Policies