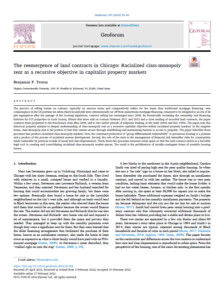 Abstract: The practice of selling homes on contract—typically on onerous terms and comparatively riskier for the buyer than traditional mortgage financing—was commonplace in the US postwar era when Black households were systematically cut off from mainstream mortgage financing. Assumed to be relegated to an era of de jure segregation after the passage of fair housing legislation, contract selling has reemerged since 2008. By forensically recreating the ownership and financing histories for 515 properties in Cook County, Illinois that were sold on contract between 2011 and 2015 and a close reading of recorded land contracts, the paper connects these properties to the foreclosure crisis after 2008, and to two earlier periods of subprime lending, in the early 2000s and late 1990s. The paper uses this historical property analysis to deepen understanding of class-monopoly rent as a recursive capitalist objective within racialized property markets. In the simplest terms, class-monopoly rent is the portion of rent that owners secure through establishing and maintaining barriers to access to property. The paper describes three processes that produce racialized class-monopoly markets. First, the continued production of “group-differentiated vulnerability” to precarious housing is a premise and a product of the process of racialized uneven development. Second, the role of the state in the management of financial risk intensifies risks for communities made vulnerable by previous rounds of racial and class dispossession. Third, these two processes structure urban space so that the land contract serves as a tractable
legal tool in creating and consolidating racialized class-monopoly market spaces. The result is the proliferation of racially-contingent forms of unstable housing tenure.

Download >> The Reemergence of Land Contracts in Chicago: Racialized Class-Monopoly Rent as a Recursive Objective in Capitalist Property Markets

Corporate Landlords and Market Power: What Does the Single-Family Rental Boom... Racial Regimes of Property: Introduction to the Special Issue
Scroll to top