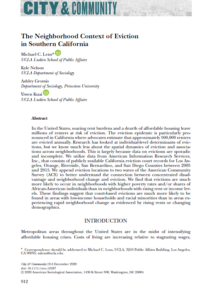 Abstract: In the United States, soaring rent burdens and a dearth of affordable housing leave millions of renters at risk of eviction. The eviction epidemic is particularly pronounced in California where advocates estimate that approximately 500,000 renters are evicted annually. Research has looked at individual-level determinants of evictions, but we know much less about the spatial dynamics of eviction and associations across neighborhoods. This is largely because data on evictions are sporadic and incomplete. We utilize data from American Information Research Services, Inc., that consists of publicly available California eviction court records for Los Angeles, Orange, Riverside, San Bernardino, and San Diego Counties between 2005 and 2015. We append eviction locations to two waves of the American Community Survey (ACS) to better understand the connection between concentrated disadvantage and neighborhood change and eviction. We find that evictions are much more likely to occur in neighborhoods with higher poverty rates and/or shares of African American individuals than in neighborhoods with rising rent or income levels. These findings suggest that court-based evictions are much more likely to be found in areas with low-income households and racial minorities than in areas experiencing rapid neighborhood change as evidenced by rising rents or changing demographics.

Download >> The Neighborhood Context of Eviction in Southern California

Blueprint for the Future: Unhoused Tenant Organizing in Los Angeles Fighting for Housing Justice in the Americas
Scroll to top