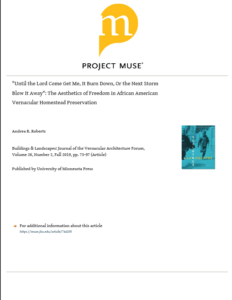 “Until the Lord Come Get Me, It Burn Down, Or the Next Storm Blow It Away”: The Aesthetics of Freedom in African American Vernacular Homestead Preservation
Buildings & Landscapes: Journal of the Vernacular Architecture Forum
Authored by #UnequalCities Network Core Partner Andrea Roberts

Abstract: Angel David Nieves and Leslie M. Alexander’s We Shall Independent Be (2008), which contemplated the relationship between American ideals such as freedom and black space creation, advanced the validity of vernacular African American placemaking and architecture as a by-product of protest, cultural expression, and intentional design. Despite this, few scholars have focused on related rural African American building and preservation practices as expressions of a continuous freedom struggle and diasporic search for home. Through observation of African American grassroots preservationists, this essay argues for increased attention to rural grassroots homestead preservation. From 1865 to 1920, former slaves founded more than 557 “freedom colonies” across Texas. Ethnographic and archival research conducted within Newton County freedom colonies demonstrates that descendants, regardless of residency status, have sustained place attachments and nurtured stewardship of homesteads through heritage conservation, rehabilitation, and family property retention. Rehabilitation activities in two settlements, Shankleville and Pleasant Hill, show the relationship between intangible heritage and descendants’ landscape stewardship practices. The concept, called here the homeplace aesthetic, illuminates descendants’ preservation methods, resilience strategies, and stylistic preferences as unrecognized dimensions of significance and integrity. The concept of a homeplace aesthetic also explains descendants’ concurrent negotiation—through subversion and assimilation—of the racialized landscape and regulatory environment, with important implications for preservation documentation and legal regulations.

Download >> “Until the Lord Come Get Me, It Burn Down, Or the Next Storm Blow It Away”: The Aesthetics of Freedom in African American Vernacular Homestead Preservation

Fighting for Housing Justice in the Americas Digital Cartographies of Displacement: Data as Property and Property as Dat...
Scroll to top