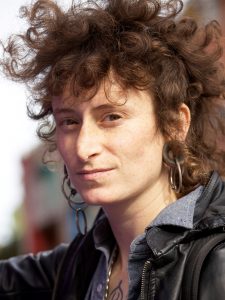 University of Texas at Austin

Erin McElroy is an assistant professor of American Studies at the University of Texas at Austin. McElroy is also the co-founder of the Anti-Eviction Mapping Project, a counter-mapping and digital storytelling collective that documents dispossession and resistance struggles upon gentrifying landscapes, focusing upon the San Francisco Bay Area, Los Angeles, and New York City and cofounder of the Radical Housing Journal, a new peer-reviewed journal bringing together scholar-activist housing justice work transnationally. They earned their doctoral degree in Feminist Studies from the University of California, Santa Cruz, with a dissertation project entitled Unbecoming Silicon Valley: Techno Imaginaries and Materialities in Postsocialist Romania. This project analyzes the politics of space, race, technology, and displacement in Romania and Silicon Valley, as well as modes of resistance and deviance. Unbecoming Silicon Valley forges together the twin concepts of racial technocapitalism and Silicon Valley imperialism in order to understand temporal and racial entanglements in postsocialist space.

The Anti-Eviction Mapping Project (AEMP) formed in the height of the San Francisco Bay Area’s “Tech Boom 2.0,” in which entanglements of technocapitalism, real estate speculation, prior histories of racial dispossession, and local and state policies fomented increased rates of eviction and displacement. The AEMP emerged to provide analytics, media, and documentation that could be used by local housing justice organizations and activists in their fights against gentrification, from the  San Francisco Tenants Union to the statewide Tenants Together. Prioritizing producing knowledge with rather that for those most impacted by gentrification and racial dispossession, the project has since grown in region, method, and scope. Erin has collaboratively organized the project from its inception, and continues to do so as the project expands. They have also produced an array of writing on the AEMP, often in collaboration with other AEMP members, in journals such as the Annals of the American Associations of Geographers, American Quarterly, the Berkeley Planning Journal, Social Identity, Media-N, and more, as well in several anthologies and forthcoming geography journals. At the moment, the AEMP is in the midst of producing its first atlas, Counterpoints: Bay Area Data and Stories for Resisting Displacement, which will be published by PM Press in 2020.

In Romania, Erin is an active member with Frontul Comun pentru Dreptul la Locuire (Common Front for the Right to Housing / FCDL), working with the collective in fighting evictions though direct action and producing maps and analysis of restitution evictions. They are also involved in the production of an Antipode-supported guide book in fighting anti-Roma racism in the realm of Romanian housing struggles. The FCDL, as well as its sister organization in Cluj, Căși Sociale Acum (Social Housing Now), are part of the European Action Coalition for the Right to Housing, and both are involved in struggles to produce analysis of Eastern European and Romanian housing justice struggles as they vastly differ from those of the West. Working with both groups, as well as with the Radical Housing Journal and AEMP, Erin hopes to continue to build transnational solidarities that can amplify the local contexts and analyses of on-the-ground movements.