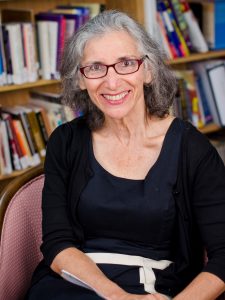 Gilda Haas is an organizer, educator, and urban planner who has been helping grassroots organizations build economies from the ground up for the past forty years.

This work began in 1977 when she organized a consortium of seven small Central California Indian reservations (rancherias) which shared her as their economic development planner.

Gilda was active in the Los Angeles Coalition to Stop Plant Closures and the Plant Closures Project in Oakland in the 1980s, and wrote a pamphlet on how to combat plant closures on their behalf that was published by South End Press.

Gilda has been a long-time organizer in the movement for tenants’ rights in L.A. and worked on rent control campaigns for the Coalition for Economic Survival as well as the Cityhood campaign that established the City of West Hollywood, where she worked as one of their first staff members. She also worked in L.A City Hall as the planning deputy for City Council member Michael Woo.

In the early 1990s, Gilda organized Communities for Accountable Reinvestment which obtained the first Federal Reserve hearings in Los Angeles on issues related to redlining; negotiated community reinvestment agreements with several major financial institutions; and established the first community development credit union in the U.S. to have received a charter in over a decade.

In 1996, Gilda became the founding director of Strategic Actions for a Just Economy which was responsible for creating the nation’s first welfare-to-work bank account; forming the coalition that negotiated the “Staples” community benefits agreement; and establishing the land trust now known as Trust South L.A.

Gilda was also the founding director of the Community Economic Development Unit of Legal Aid which has served as a model for many other legal services organizations.

In 2007, Gilda, along with Gihan Perera of the Miami Workers Center and Jon Liss of Tenants and Workers United formed the Right to the City alliance which advances a human rights frame to urban problems and is presently the home of the national Homes for All Campaign.

Gilda taught community economic development courses in UCLA’s Department of Urban Planning for 28 year and is a founder of their Community Scholars Program which has been replicated in various forms at other universities around the country. She also spent five years as full-time faculty in Antioch University’s Urban Sustainability program, where she created their Big Question Lab.

Gilda is a co-founder of the L.A. Co-op Lab which seeks to build L.A.’s capacity for creating and sustaining worker-owned cooperatives,, and currently devotes the bulk of her time towards that endeavor. The L.A. Co-op Lab is a member of a national Peer Network of cooperative developers and lenders and the associated Financial Cooperative of which she is a Board member.

Gilda’s fellowships and awards include being a Synergos Senior Fellows and a recipient of the Durfee Stanton Fellowship.

Gilda lives in Los Angeles and is married to mystery writer Gary Phillips.