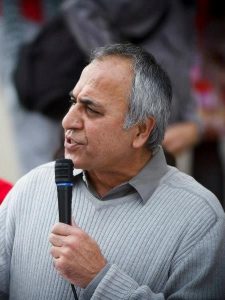 Hamid Khan is an organizer with the Stop LAPD Spying Coalition. The mission of the coalition is to build community-based power to dismantle police surveillance, spying, and infiltration programs. The coalition utilizes multiple campaigns to advance an innovative organizing model that is Los Angeles-based but has implications regionally, nationally, and internationally.

An immigrant from Pakistan, Hamid came to the United States in 1979. As founder and former Executive Director of South Asian Network (1990-2010), Hamid helped create the first grass roots community-based organization in Los Angeles committed to informing and empowering thousands of South Asians in Southern California to act as agents of change in eliminating biases, discrimination and injustices.

Hamid serves on the board of Political Research Associates, an organization that seeks to advance progressive thinking and action by providing research-based information, analysis, and referrals.

In 2003, Hamid was selected for LA Stories: The Power of One by the Facing History and Ourselves. Hamid was also honored by the California State Assembly in 2006 for “excellence in public service and his dedication and contributions to the people of the State of California and beyond.”