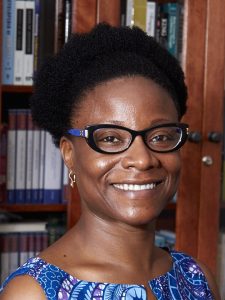 The University of Pennsylvania

Keisha-Khan Y. Perry received her BS in Spanish and Women’s Studies from Georgetown University and her MA and PhD in Social Anthropology from the University of Texas at Austin. She is currently the Presidential Penn Compact Associate Professor of Africana Studies at The Pennsylvania State University where she specializes in race, gender and politics in the Americas, urban geography and questions of citizenship, intellectual history and disciplinary formation, and the interrelationship between scholarship, pedagogy and political engagement. She has conducted extensive research in Argentina, Belize, Brazil, Ecuador, Mexico, and the United States.

Her first book, Black Women against the Land Grab: The Fight for Racial Justice in Brazil (fall 2013, Minnesota Press), is an ethnographic study of black women’s activism in Brazilian cities, specifically an examination of black women’s participation and leadership in neighborhood associations, and the re-interpretations of racial and gender identities in urban spaces. The book is the result of more than a decade of research collaborations with local activists in the Gamboa de Baixo (also called Gamboa) neighborhood of the city of Salvador that is at the heart of the work. Winner of the National Women’s Studies Association 2014 Gloria E. Anzaldúa Book Award, this book includes an analysis of the relationship between between violent state policing and mass evictions as well as between environmental justice movements and land and housing rights struggles in Brazil. She is currently writing the book, Anthropology for Liberation, that draws heavily from her ethnographic research experience in Brazil with an emphasis on the complexity of doing activist research amidst racial and gender violence.

The second research project, The Historical Paradox of Citizenship: Black Land Ownership and Loss in the Americas, is a continuation of this research in documenting and analyzing the political paradox of black land loss and ownership in relationship to the material articulation of citizenship in Brazil, Jamaica, and the United States. A third book, Evictions and Convictions, centers the research on policing in gentrifying neighborhoods in New York City with an emphasis on black women’s experiences with incarceration and housing evictions. Another ongoing research project is a multi-lingual and transnational exploration of black women’s political work in Latin America. She examines how black women mobilize political movements across borders and how they understand themselves as agents in creating a diasporic community. She has won numerous awards over the years to support her research such as the National Science Foundation and Fulbright fellowships, Richard B. Salomon Faculty Research Award, Pembroke Center Seed Grant for Collaborative Research, Center for the Study of Slavery and Justice Faculty Collaborative Research Award, Watson Center for Public and International Affairs Collaboration Grant.

Watch Keisha-Khan Y. Perry in the short video, Learning From Black Women’s Resistance, part of the #UnequalCities series of conversations on housing justice.