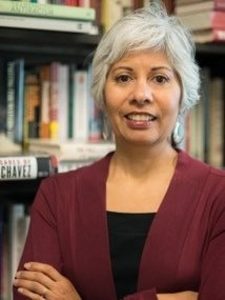 Laura Pulido is Professor and Head of Ethnic Studies and Professor of Geography at the University of Oregon where she currently studies race, landscape, environmental justice, and cultural memory. She is the author of numerous books, including Environmentalism and Economic Justice: Two Chicano Struggles in the Southwest; Black, Brown, Yellow and Left: Radical Activism in Los Angeles; A People’s Guide to Los Angeles (with Laura Barraclough and Wendy Cheng), and most recently she worked with Jordan Camp to posthumously complete Clyde Woods’s, Development Drowned and Reborn: The Blues and Bourbon Restoration in Post-Katrina New Orleans. She has received numerous honors, including the Presidential Achievement Award from the Association of American Geographers and Ford and Guggenheim fellowships.

Most of her research explores the relationship between race, place, and economic processes, through both forms of domination and resistance. Most recently her research has shifted to questions of cultural memory and the various ways and means which the historical role of racism is denied – which is fundamental to its reproduction. Currently, she is studying sites on the National Registrar of Historic Places and how they narrate and represent histories and geographies of foundational white supremacy – the white supremacy implicated in the creation of the US nation, state, and territory. The end goal is to create an historical atlas of white supremacy, which will document both the various forms of white supremacy involved in the creation of the US, as well as the degree to which it is erased through practices of historical commemoration.

As part of her scholarship, Laura is deeply committed to public scholarship and popular education.

The book, A People’s Guide to Los Angeles, a radical tour guide that documents sites of racial, class, gender, and environmental struggle in the history and landscape of Los Angeles, is the basis for a book series. Working with Laura Barraclough, Wendy Cheng, and the University of California Press, there are now a dozen People’s Guide books in the pipeline.