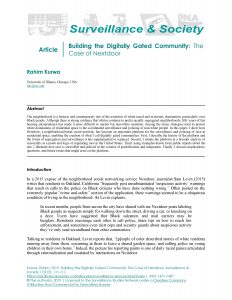 Abstract: The neighborhood is a historic and contemporary site of the assertion of white racial and economic domination, particularly over Black people. Although there is strong evidence that whites continue to prefer racially segregated neighborhoods, fifty years of fair housing jurisprudence has made it more difficult to openly bar non-white residents. Among the many strategies used to protect white domination of residential space is the coordinated surveillance and policing of non-white people. In this paper, I show how Nextdoor, a neighborhood-based social network, has become an important platform for the surveillance and policing of race in residential space, enabling the creation of what I call digitally gated communities. First, I describe the history of the platform and the forms of segregation and surveillance it has supplemented or replaced. Second, I situate the platform in a broader analysis of carcerality as a mode and logic of regulating race in the United States. Third, using examples drawn from public reports about the site, I illustrate how race is surveilled and policed in the context of gentrification and integration. Finally, I discuss implications, questions, and future issues that might arise on the platform.

Download >> Building the Digitally Gated Community: The Case of Next Door

‘Post-2008’ as a Field of Action and Inquiry in Uneven Housing Justice ... Just Housing is an Intersectional Struggle
Scroll to top