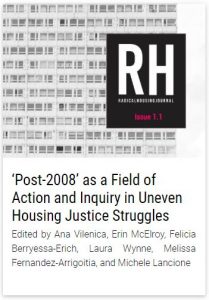 Abstract: The first issue of the Radical Housing Journal focuses on practices and theories of organizing as connected to post-2008 housing struggles. As 2008 was the dawn of the subprime mortgage and financial crisis, and as the RHJ coalesced ten years later in its aftermath, we found this framing apropos. The 2008 crisis was, after all, a global event, constitutive of new routes and formations of global capital that in turn impacted cities, suburbs, and rural spaces alike in highly uneven, though often detrimental, ways. Attentive to this, we hoped to think through its globality and translocality by foregrounding “post-2008” as field of inquiry. What new modes of knowledge pertinent to the task of housing justice organizing could be gained by thinking 2008 through an array of geographies, producing new geographies of theory?

What’s at Stake in Contemporary Anti-Gentrification Movements? Building the Digitally Gated Community: The Case of Next Door
Scroll to top