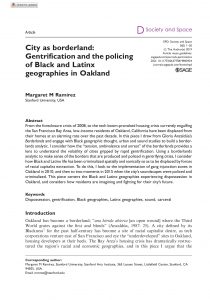 Abstract: From the foreclosure crisis of 2008, to the tech boom-provoked housing crisiscurrently engulfing the San Francisco Bay Area, low-income residents of Oakland, California have been displaced from their homes at an alarming rate over the past decade. In this piece I draw from Gloria Anzaldua’s Borderlands and engage with Black geographic thought, urban and sound studies to build a borderlands analytic. I consider how the “tension, ambivalence and unrest” of the borderlands provides a lens to understand the volatility of cities gripped by rapid gentrification. Using a borderlands analytic to make sense of the borders that are produced and policed in gentrifying cities, I consider how Black and Latinx life has been criminalized spatially and sonically so as to be displaced by forces of racial capitalist extraction. To do this, I look to the implementation of gang injunction zones in Oakland in 2010, and then to two moments in 2015 when the city’s soundscapes were policed and criminalized. This piece centers the Black and Latinx geographies experiencing dispossession in Oakland, and considers how residents are imagining and fighting for their city’s future.

Download >> City as Borderland: Gentrification and the Policing of Black and Latinx Geographies in Oakland

Rent Gap Theory is a Political Resource Deracinated Dispossessions: On the Foreclosures of “Gentrification”...
Scroll to top