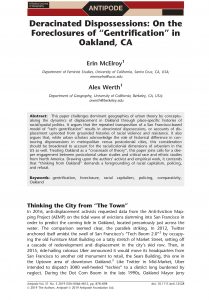 Deracinated Dispossessions: On the Foreclosures of “Gentrification” in Oakland, CA
Antipode
By #UnequalCities Network members Erin McElroy and Alex Werth

Abstract: This paper challenges dominant geographies of urban theory by conceptualising the dynamics of displacement in Oakland through place‐specific histories of racial/spatial politics. It argues that the repeated transposition of a San Francisco‐based model of “tech gentrification” results in deracinated dispossessions, or accounts of displacement uprooted from grounded histories of racial violence and resistance. It also argues that, while urban scholars acknowledge the role of historical difference in contouring dispossessions in metropolitan versus postcolonial cities, this consideration should be broadened to account for the racial/colonial dimensions of urbanism in the US as well. Treating Oakland as a “crossroads of theory,” this paper joins calls for a deeper engagement between postcolonial urban studies and critical race and ethnic studies from North America. Drawing upon the authors’ activist and empirical work, it contends that “thinking from Oakland” demands a foregrounding of racial capitalism, policing, and refusal.

Download >> Deracinated Dispossessions: On the Foreclosures of “Gentrification” in Oakland, CA

City as Borderland: Gentrification and the Policing of Black and Latinx Geographies... Access to Justice for the Right to Housing
Scroll to top