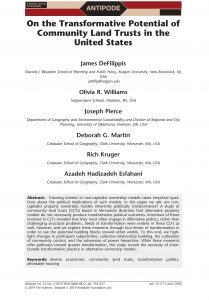 Summary: Growing interest in non-capitalist ownership models raises empirical questions about the political implications of such models. In this paper we ask: are non-capitalist property ownership models inherently politically transformative? A study of community land trusts (CLTs) based in Minnesota illustrates that alternative property models do not necessarily produce transformative political outcomes. Interviews of those involved in CLTs revealed that they most often engage in affirmative politics, rather than challenging structural problems. Seeds of transformation were evident in these CLTs as well, however, and we explore these moments through four lenses of transformation in order to see the potential building blocks toward other worlds. To this end, we highlight changes in participant subjectivities, collective relationship building, the cultivation of community control, and the subversion of power hierarchies. While these moments offer pathways toward greater transformation, this study reveals the necessity of intentionally transformative practice in alternative ownership models.