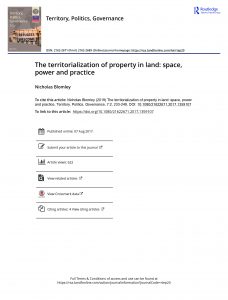 Summary: To understand the crucial work of property in land in enforcing and sustaining relationships of power between people, it is necessary to analyze the particular manner in which property became territorialized. I focus here on one crucial moment in which this occurred – the reconception of the space of landed property in seventeenth century rural England – tracing three domains of practice – surveying, husbandry and law. These forms of expert knowledge did not simply record changes in property’s reterritorialization, I suggest, but actively participated in its remaking. As an ‘interaction device’, territory helped reconstitute changing property relations. While drawing from previous geographies of property, these practices placed an increased importance upon a territorial exclusivity that centered on individual rights, most particularly the right of the individual to exclude others. As such, the legal and practical defense of territory became of more pressing importance. This shift relied on and helped sustain a particular logic of visualization and spatialization, I shall suggest. Increasingly, property became disentangled from a localized nexus of collectively organized relations, and became situated within wider networks of calculation and commodification. The geographies of property forged in this period continue to be important to contemporary life, framing power relations in particular ways. As such, they demand our attention.

Read >> The Territorialization of Property in Land: Space, Power and Practice

Ripping the Heart Out of Ancoats: Collective Action to Defend Infrastructures... On the Transformative Potential of Community Land Trusts in the United Stat...
Scroll to top