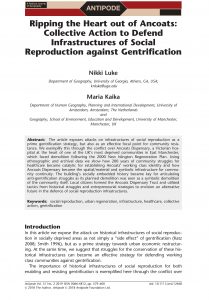 Summary: The article exposes attacks on infrastructures of social reproduction as a prime gentrification strategy, but also as an effective focal point for community resistance. We exemplify this through the conflict over Ancoats Dispensary, a Victorian hospital at the heart of one of the UK’s most deprived communities in East Manchester, which faced demolition following the 2000 New Islington Regeneration Plan. Using ethnographic and archival data we show how 200 years of community struggles for healthcare became catalytic for establishing Ancoats’ working class identity and how Ancoats Dispensary became the spatial/material and symbolic infrastructure for community continuity. The building’s socially embedded history became key for articulating anti-gentrification struggles as its planned demolition was seen as a symbolic demolition of the community itself. Local citizens formed the Ancoats Dispensary Trust and utilized tactics from historical struggles and entrepreneurial strategies to envision an alternative future in the defense of social reproduction infrastructures.

Read >> Ripping the Heart Out of Ancoats: Collective Action to Defend Infrastructures of Social Reproduction Against Gentrification

In Bodies and Homes: Gendering Citizenship in South African Cities The Territorialization of Property in Land: Space, Power and Practice
Scroll to top