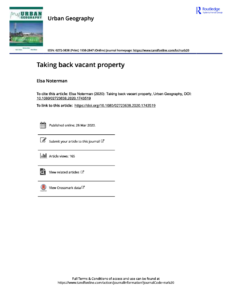 Abstract: “Taking back” has long been a rallying call of urban social movements asserting land rights. This call often involves seeking to ward off dispossession by taking possession. Scholars rethinking property beyond the normative “ownership model” have explored the seeming paradoxicality of resisting dispossession through legal forms of possession that reproduce deprivation. In this paper, I consider the possibilities for taking back the concept of possession itself by examining claims to “vacant” property in Philadelphia. I put taking back through a citywide “land bank” in conversation with the taking over of a poor people’s movement that occupies government-owned properties as a means of survival and political mobilization. I argue that outside or on the edge of legal recognition, the effort to take back property functions not as an end in itself, but rather as an explicitly political taking on of the notion of possessive ownership.

Hedge Papers No. 69: Billionaire Corporate Landlords are Exacerbating California’s... Data for Justice: Tensions and Lessons from the Anti-Eviction Mapping Project’s...
Scroll to top