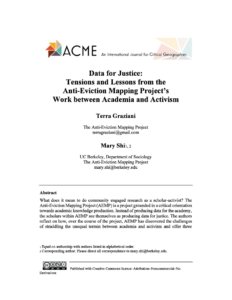 Abstract: What does it mean to do community engaged research as a scholar-activist? The Anti-Eviction Mapping Project (AEMP) is a project grounded in a critical orientation towards academic knowledge production. Instead of producing data for the academy, the scholars within AEMP see themselves as producing data for justice. The authors reflect on how, over the course of the project, AEMP has discovered the challenges of straddling the unequal terrain between academia and activism and offer three principles which have become key to AEMP’s own navigation of this academia-activism divide: mutual aid, accountability, and embeddedness.

Download >> Data for Justice: Tensions and Lessons from the Anti-Eviction Mapping Project’s Work Between Academia and Activism

Taking Back Vacant Property Second Chances in the City: Public Housing and Prisoner Reentry in Chicago
Scroll to top