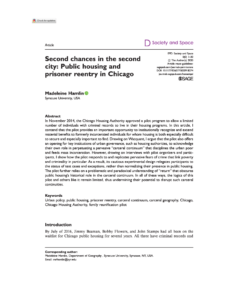 Abstract: In November 2014, the Chicago Housing Authority approved a pilot program to allow a limited number of individuals with criminal records to live in their housing programs. In this article, I contend that the pilot provides an important opportunity to institutionally recognize and extend material benefits to formerly incarcerated individuals for whom housing is both especially difficult to secure and especially important to find. Drawing on Wacquant, I argue that the pilot also offers an opening for key institutions of urban governance, such as housing authorities, to acknowledge their own role in perpetuating a pervasive “carceral continuum” that disciplines the urban poor and feeds mass incarceration. However, drawing on interviews with pilot organizers and participants, I show how the pilot responds to and replicates pervasive fears of crime that link poverty and criminality in particular. As a result, its cautious experimental design relegates participants to the status of test cases and exceptions, rather than normalizing their presence in public housing. The pilot further relies on a problematic and paradoxical understanding of “return” that obscures public housing’s historical role in the carceral continuum. In all of these ways, the logics of this pilot and others like it remain limited, thus undermining their potential to disrupt such carceral continuities.

Download >> Second Chances in the City: Public Housing and Prisoner Reentry in Chicago

Data for Justice: Tensions and Lessons from the Anti-Eviction Mapping Project’s... “A Plantation Can Be A Commons”: Re-Earthing Sapelo Island through Abolition...
Scroll to top