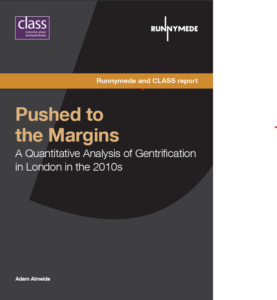 Excerpt: This report reveals that over the last three decades, working class, Black and ethnic minority Londoners have increasingly found themselves at the mercy of the city’s urban design, its politics, and the movement of capital. For these Londoners, gentrification does not mean artisanal coffee shops and new wine bars; it means being pushed out of areas they have lived all their lives, losing local spaces, and the fracturing of communities. The report shows how even seemingly arbitrary geographical features like transit terminuses, bodies of water and warehouse spaces can dramatically change the composition of a community; determining who can afford to live there, and who feels that the community is built for them. Gentrification is beginning to impact all but the very wealthiest of Londoners, but it is through examining the experiences of those at the sharpest end can we understand how it really works as a social and economic force.

Download >> Pushed to the Margins: A Quantitative Analysis of Gentrification in London in the 2010s

Racialized Geographies of Housing Financialization “A Program, Not the Projects”: Reentry in the Post-Public Housing...
Scroll to top