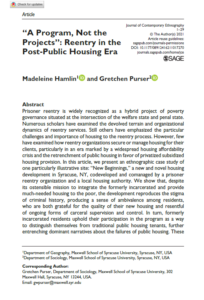 “A Program, Not the Projects”: Reentry in the Post-Public Housing Era
Journal of Contemporary Ethnography
Co-authored by #UnequalCities Network members Madeleine Hamlin and Gretchen Purser

Abstract: Prisoner reentry is widely recognized as a hybrid project of poverty governance situated at the intersection of the welfare state and penal state. Numerous scholars have examined the devolved terrain and organizational dynamics of reentry services. Still others have emphasized the particular challenges and importance of housing to the reentry process. However, few have examined how reentry organizations secure or manage housing for their clients, particularly in an era marked by a widespread housing affordability crisis and the retrenchment of public housing in favor of privatized subsidized housing provision. In this article, we present an ethnographic case study of one particularly illustrative site: “New Beginnings,” a new and novel housing development in Syracuse, NY, codeveloped and comanaged by a prisoner reentry organization and a local housing authority. We show that, despite its ostensible mission to integrate the formerly incarcerated and provide much-needed housing to the poor, the development reproduces the stigma of criminal history, producing a sense of ambivalence among residents, who are both grateful for the quality of their new housing and resentful of ongoing forms of carceral supervision and control. In turn, formerly incarcerated residents uphold their participation in the program as a way to distinguish themselves from traditional public housing tenants, further entrenching dominant narratives about the failures of public housing. These findings reveal the complex interplay between the project of reentry and the provision of subsidized housing in the post-public housing era.

Download >> “A Program, Not the Projects”: Reentry in the Post-Public Housing Era

Pushed to the Margins: A Quantitative Analysis of Gentrification in London in... Counterpoints: A San Francisco Bay Area Atlas of Displacement and Resistanc...
Scroll to top