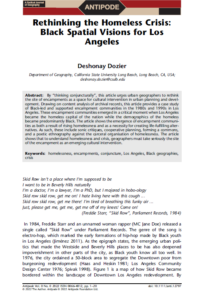 Abstract: By “thinking conjuncturally”, this article urges urban geographers to rethink the site of encampments as a space for cultural intervention in urban planning and development. Drawing on content analysis of archival records, this article provides a case study of Black-led and supported encampment communities in the 1980s and 1990s in Los Angeles. These encampment communities emerged in a critical moment when Los Angeles became the homeless capital of the nation while the demographics of the homeless became predominantly Black. The article shows the emergence of encampment communities as both a result of rising homelessness and as a necessity for creating life-fulfilling alternatives. As such, these include sonic critiques, cooperative planning, forming a commons, and a poetic ethnography against the carceral organisation of homelessness. The article shows that to understand homelessness and crisis, geographers must take seriously the site of the encampment as an emerging cultural intervention.

Property and Policing in Louisville, KY Collectively Organized Endurance Through Space and Time To Transform Debt R...
Scroll to top