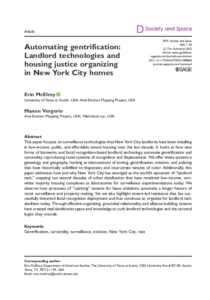 Abstract: This paper focuses on surveillance technologies that New York City landlords have been installing in low-income, public, and affordable tenant housing over the last decade. It looks at how new forms of biometric and facial recognition-based landlord technology automate gentrification and carcerality, reproducing racist systems of recognition and displacement. We offer these systems a genealogy and geography, looking at intersections of zoning, gentrification, eviction, and policing that have historically solidified to dispossess and incarcerate tenants of color. Additionally, this paper addresses how and why New York City has emerged as the world’s epicenter of “landlord tech,” mapping out several decades of urban datafication that have rendered low-income, nonwhite majority housing complexes as laboratories for surveillance experimentations today. We observe how processes of “catching” tenants for lease violations automate a longer history of racist surveillance and property-making. Yet we also highlight tenant-led resistance that has successfully thwarted facial recognition deployment and that continues to organize for landlord tech abolition today. Through affective organizing, grounded relationality, and alliance-building, tenants have created vital abolitionist space and knowledge to curb landlord technologies and the carceral logics they encode.

Spatial Segregation and the Right to Adequate Housing Social Housing for All: A Vision for Thriving Communities, Renter Power, and...
Scroll to top